Brexit Day Arrives With A Whimper

‘Do or Die’ said Boris Johnson as he promised to Get Brexit Done .

Brexit Day has arrived not with the bang of departure – but a whimper from Johnson that it is not his fault .

Nigel Farage widely predicted this betrayal of his Brexit . However he is nowhere to be seen and his response has been muted – attacking the deal , not Johnson 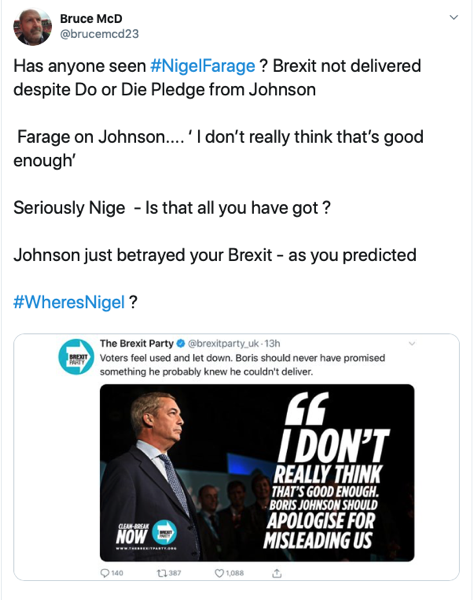 Then Sebastian Payne popped up to confirm what was widely suspected . Farage – the man proclaiming he was changing politics for good – was holed up working on what he refers to as his Non Aggression Pact – apparently unconcerned about the term’s historical antecedence : the division of Eastern Europe between Hitler and Stalin . 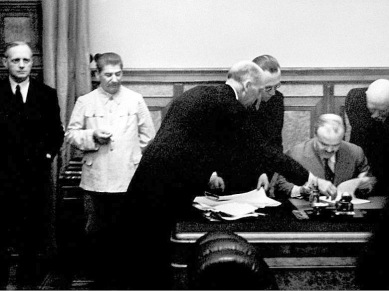 So Brexiteers are faced with the man who broke his pledge ‘Do or Die’ to deliver Brexit on 31 October complaining that the failure is the fault off others , and the man who promised to hold his feet to the fire , not exposing the betrayal – but holding his tongue in the hope of striking a deal

However , as might have been expected , the sense of betrayal over Johnson’s broken promise runs deep . Half of Leave voters feel betrayed 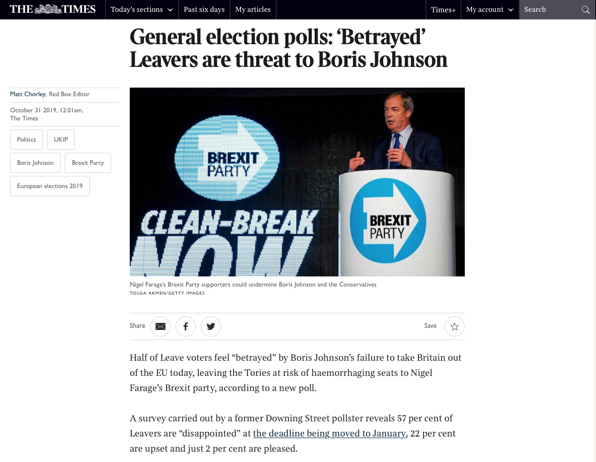 James Johnson explains graphically the nature and the extent of the sense of betray in this thread .

I’ve done some polling for @thetimes looking at how voters feel about the Oct 31st deadline being missed.

Most strikingly, *half* of Leave voters say they feel “betrayed” by extension. This is substantially higher than at previous extensions. https://t.co/CBr6o7Gdjz
1/6

But so far the silence is deafening . Where are Peston and Kuennsberg?